Winnipeg’s sports, hospitality and entertainment district continues to expand
May 14, 2019 10:00 AM By: Wi Staff 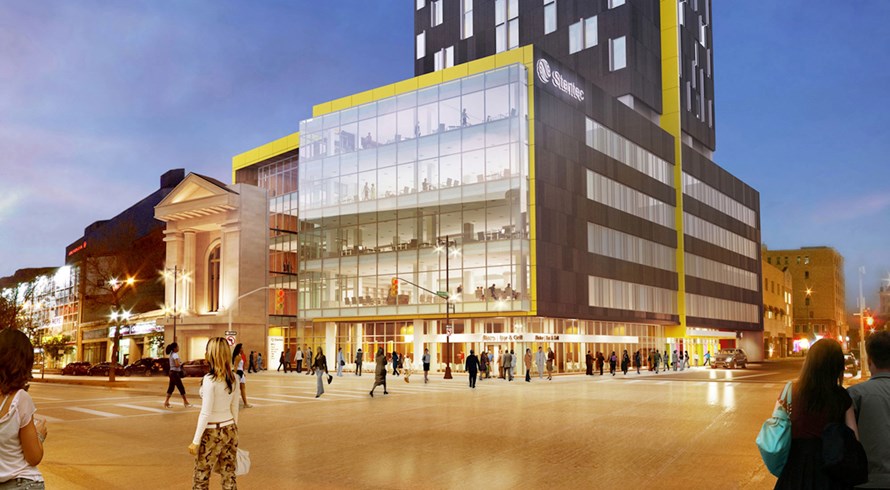 Recent highlights include the doubling of the RBC Convention Centre Winnipeg, ongoing improvements to Bell MTS Place, the home of the Winnipeg Jets, and continuous upgrades to the Burton Cummings Theatre, the more than century-old heritage building that welcomed Charlie Chaplin in its early years and blues rocker Colin James a few weeks ago.

“The SHED was a figment of our imagination for a long time. Slowly but surely, it’s appeared before our eyes. It’s real, vibrant and alive. In order to have a vibrant SHED, you need people eating out and living there. And you need a public square where you can raise the Stanley Cup,” said Ryan Behie of CBRE Winnipeg.

That could be more than a dream: the Winnipeg Jets are among three Canadian teams in the playoffs for the Stanley Cup this season.

As downtown Winnipeg becomes more diverse and a growing hive of activity, that puts pressure on landlords of older buildings to also up their game, Behie said.

He noted the new owners of 330 Portage recently started an $8-million upgrade to both the interior and exterior of the 18-storey building next door to Bell MTS Place.

“When they’re done, it will look like a very different building, inside and out. This is an example of the ripple effect of True North Square. You can’t look out any window and not see a shiny new impressive office or entertainment building. That gentrification is breeding gentrification,” he said.

On the industrial side, Behie believes the modest negative net absorption in the first quarter of just less than 33,000 square feet is only a blip.

That’s because over the past two years, more than 400,000 square feet has welcomed new businesses and operators.

“Nobody is saying the sky is falling. You’re coming off record growth. On the whole, we’re still in a massive growth phase,” he said.

It’s worth noting, Behie said, that the industrial space available is generally older, of lower quality and without higher ceilings and larger loading door counts.