In September, more Saskatchewan drill rigs were being cut up for scrap metal than were drilling for oil
Oct 5, 2020 8:15 AM By: Western Investor Staff 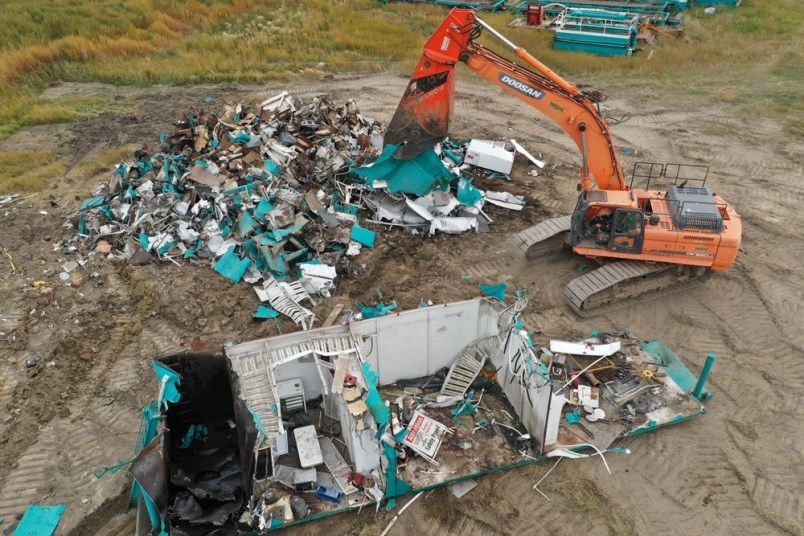 In late September nine drill rigs were working in Saskatchewan while at least 10 were being cut into scrap metal, according to a count by Pipeline News and Rig Locator.

There was no oil drilling going on in southwest Saskatchewan, once the province’s oil-drilling hot spot.

In Cardiff on September 14, a 52-tonne excavator equipped with giant hydraulic shears tore through the last building of what was once a Saskatchewan-based drilling rig, A hundred metres away, a large pile of tangled steel was once three complete oil drilling rigs, which once punched through southeast Saskatchewan’s rock.

This summer, Ensign Energy cut up 10 Saskatchewan-based drilling rigs for scrap. Several of those rigs were Kelly telescopic doubles less than 15 years old. Several would have had less than 10- year service on them, as they’ve been racked for the last five years. They initially cost between $5 and $8 million apiece – built in Estevan during the Bakken boom. Now, they will be melted down at Regina’s EVRAZ steel mill.

Drilling activity in Saskatchewan was flatlined at zero rigs working until mid-July, then ran around five rigs. Just in recent days, that number has climbed to around a dozen, compared to 122 less than 10 years ago, victims of a plunge in oil prices exasperated by a global pandemic.

Some of the eight former Eagle rigs were among the 10 Saskatchewan-based rigs Ensign Energy recently scrapped. Those yellow rigs sat, along with several orange former Totem Drilling rigs, in the Carlyle yard for the last five years, unmoving, as the oil downturn that took hold in late 2014 dramatically curtailed drilling demand.

Derrick Big Eagle couldn’t go see what was left of the drilling rigs he had built, as several were scrapped in recent weeks in the former Eagle Drilling Services yard in Carlyle.

“I actually didn't even go watch it. It broke my heart so badly because when I built those rigs that I thought that they were going to be 40-year rigs.

“I didn't even go look at the pile of scrap or nothing. Everybody’s saying to me, ‘Hey, they're cutting your rigs up over there, you know that?’ I heard about it, but it is what it is,” Big Eagle said.