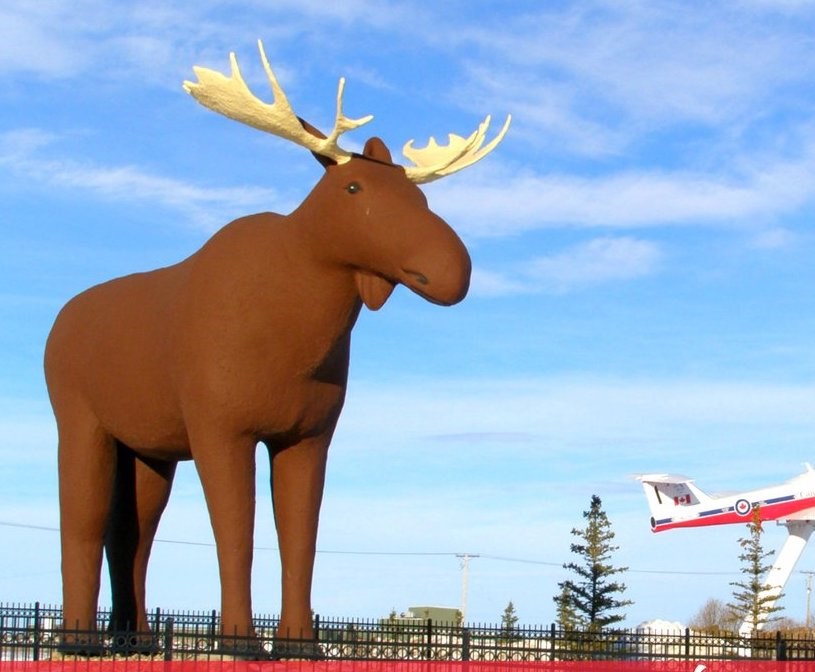 Mac the Moose has emerged the victor of the 2019 Moose War — and delivered a multimillion-dollar marketing boost to his Saskatchewan host city.

Tourism Moose Jaw executive director Jacki L’Heureux-Mason unveiled a commemorative plaque on September 18 to celebrate the Moose Truce with Norway, after the friendly comparison of statues put Mac in the international spotlight.

A new plaque, which declares Mac the Moose – a 10-ton concrete and steel statue erected in 1984 – to be the world’s tallest moose, lists all of the large donors who contributed financially to the reconstruction of Mac’s antlers, including Moosehead Breweries and Moose Jaw Co-op, has been erected at the site.

It also lists the individuals who made up Team Mac, the committee that spearheaded the antler project and provided services and expertise to help Mac step into his new era of fame.

“People were lining up, we actually had to turn people down who wanted to help,” said L’Heureux-Mason. “It was great from the very beginning, no question about that.”

A number of individuals and businesses donated their time and service to Mac’s new image, with the total cost of the project coming in at under $11,000 to complete.

L’Heureux-Mason is still in awe of the instant notoriety the Moose War brought to both Mac the Moose and the city, and she feels it was an incredible opportunity that the city grasped very well.

“At the height of it, I was entertaining eight to 10 interviews a day, from as far away as Mexico, and it was a really interesting experience to learn how to handle this kind of marketing,” said L’Heureux-Mason. “And it really opened the door for us [at Tourism] to have a more synergistic relationship in the city, which I think was a long time coming.’

The international fame, which produced an estimated marketing value of more than $7 million for the city, has also changed the way people in the community feel about Mac, said L’Heureux-Mason.  “I think it represents the image that we're trying to portray with the city, with the notorious theme. It’s a little edgy, it's a little classier, and that’s what I think he represents now for us, to anybody who comes and has seen him before.”

Mac’s makeover recently concluded with a new coat of paint to match his new antlers, which prompted Tourism to host a photo contest in search of a new image of the Moose Jaw celebrity to use on postcards and other merchandise.