Lenders say cheap financing and high tenant demand should keep developers optimistic despite apparent anti-development stance of province and some municipalities
May 9, 2019 3:23 PM By: Frank O'brien 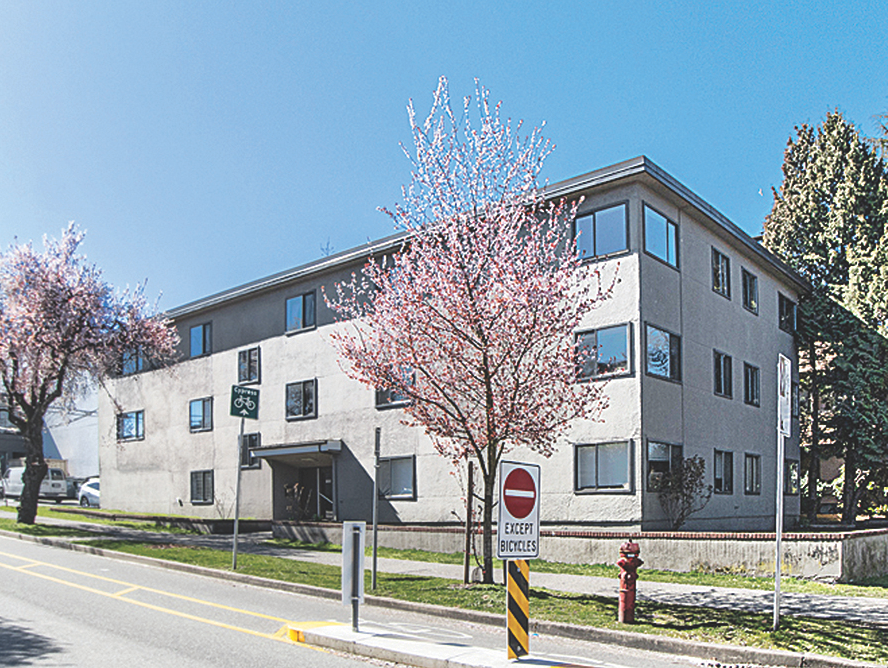 This 10-suite apartment in Vancouver’s Kitsilano area sold in April. The sale price has not been released, but it was listed at $4.99 million, $200,000 below its assessed value, which may be a sign of the times. | Goodman Report

Sales of B.C. multi-family rental buildings reached a record-shattering $1.5 billion in 2018, but evidence is mounting that sales are slowing and fewer private rentals will start construction this year.

The downturn, industry insiders say, is based on government policy that has made it harder to make money as a landlord, despite the lowest rental vacancy rates and highest rents in the country.

Governments are pressing ahead with taxpayer-subsidized rentals, but these are out of bounds for most tenants because of low-income qualifications. Meanwhile, private landlords wishing to build – or buy –  rental property face a blizzard of headwinds, according to the 2019 B.C. Multi-Family Investment Report from Avison Young.

The barriers include a lowering of B.C.’s allowable annual rent increase to 2.5 per cent in 2019; soaring land and construction costs for developers; and a growing anti-developer, anti-landlord stance in Metro municipalities following the 2018 civic elections.

Metro Vancouver has Canada’s lowest rental vacancy rate, at 1 per cent, and the highest average rents.

At the same time, provincial and federal measures to cool home sales have frozen many renters out of home buying and threaten the development of condominiums, which account for a quarter of all the rental apartments in B.C. In Metro Vancouver, the vacancy rate of the 59,000 condos in the rental universe is 0.3 per cent, according to Canada Mortgage and Housing Corp. (CMHC).

Expanding regulations, Avison Young noted, have “largely resulted in the exit of most of the aggressive value-add investors from the Metro Vancouver [rental building] market.” The agency expects sales of rental apartment buildings to fall this year, especially in the first half.

Landlord BC noted a shortage of rental housing could get worse because of government policies, warning that “the private sector is unlikely to build this needed supply under an increasingly restrictive legislative and regulatory environment. Rental developers, and the pension funds and financial institutions that lend them the money, are simply not prepared to take the risk.”

Rental incentives are also under attack. Vancouver’s Rental 100 program is an incentive for rental construction that waives development cost levies, reduces parking and increases density. It has encouraged rental building, but some council members say it should end because the allowed rental limits are “unaffordable.”

Still, B.C. developers should stay in the rental game, argues Derek Townsend, a principal with Citifund Capital Corp. He noted that tenant demand is expanding and rental construction financing is about the best deal in the real estate market.

With CMHC insurance, mortgage rates for rental projects can be as low as 2.8 per cent on 10-year loans, compared to 4.15 per cent for conventional commercial loans.

The Rental Construction Financing initiative, for example, is a CMHC direct-lending program for new projects only.  Within this program, CMHC will offer up to 100 per cent of total project cost financing, with 50-year amortization, the current 10-year mortgage rate and a 1.10x debt service ratio. (A 1.10x ratio means the cash flow generated by the property will cover the loan payment by 1.10x. This is generally lower than what most commercial mortgage lenders require. Most lenders will require a minimum ratio of 1.20x.)

“A major benefit to this program is that the 10-year term rate is set and held from the first construction advance, thus removing any interest rate risk through construction and rent-up,” Townsend noted.

Developers, however, must qualify for the financing under a “social outcome point system” based on affordability, viability, accessibility and the environmental aspects of the project.

CMHC also offers construction financing with its Affordable Mortgage Loan Insurance program. It offers 95 per cent financing and a 40-year amortization and reduced CMHC insurance premiums for purpose-built rentals. To qualify, the rental rates must be 10 per cent below market rates, and one-fifth of the units must be below the median family income for the area. In Metro Vancouver, this is estimated at $1,998 per month.

Michael Ferreira, managing principal with development consultancy Urban Analytics of Vancouver, however, says rentals could be encouraged with much simpler incentives. He recommends waiving the federal GST on rental construction, easing municipal parking requirements on rental buildings and speeding up the approval of building permits for rental housing.