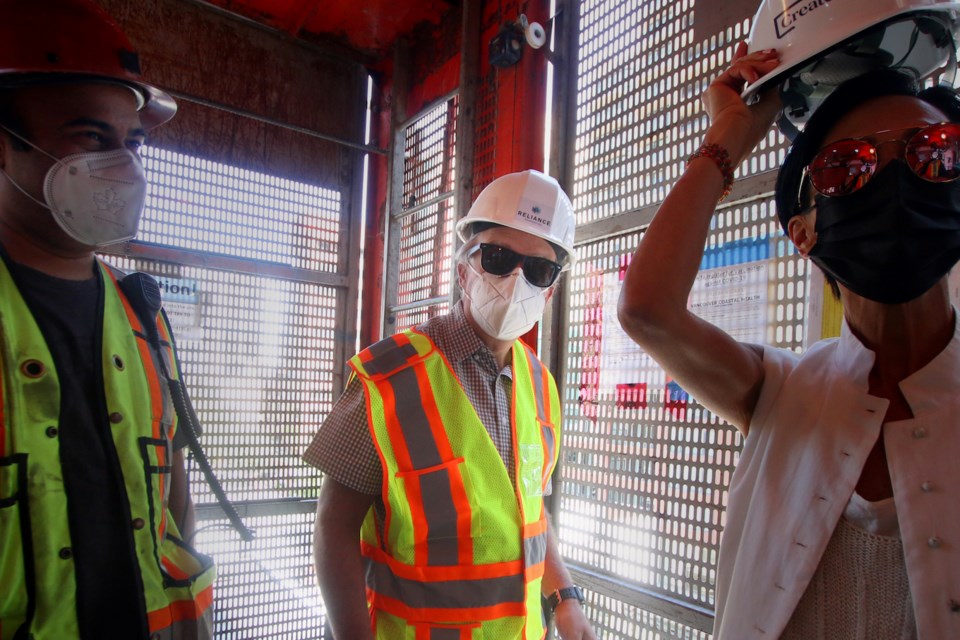 Developer Jon Stovell (centre): construction workers are among those who would benefit from “workforce rental” housing. | Rob Kruyt

No rental apartments have started construction in downtown Vancouver in the past 18 months, but developer Reliance Properties is bidding to end the drought with a Melville Street tower that would include affordable housing for city workers.

The proposal is for a 47-storey building with 484 rental units, including 104 apartments at below-market rent for essential workers earning between $39,200 to $78,500. According to Reliance, these workers don’t qualify for social housing but also can’t afford to buy a home in one of the most expensive cities for housing in the world.

The Reliance proposal dovetails with the City of Vancouver’s new Policy Enquiry Process that is meant to encourage development enquiries that don’t comply with established city building policies and bylaws.

“Every year, proposals to build more affordable housing get stuck in layer-upon-layer of often conflicting and outdated policies introduced by past councils,” said Vancouver Mayor Kennedy Stewart. “This has resulted in a backlog with many good applications deserving a fair hearing by your elected representatives never making it to the council floor.”

This is not news to Reliance.

“Our initial inquiry for our workforce housing project was almost two years ago and it never saw the light of day at city hall, even though it met key housing objectives,” said Jon Stovell, president and CEO of Reliance Properties. “Council’s new policy finally gives us a path forward.”

While the proposed site at Melville and Thurlow Streets is currently zoned for office use, Stovell said there is approximately 5.5 million square feet of office space under development in downtown to fulfill future office needs, including five towers by Reliance that are currently in various phases of design and development.

Troy Clifford, president of the Ambulance Paramedics of BC, submitted a letter of support as part of Reliance’s rezoning package.

“It is critical for emergency responders and frontline workers to live in the communities in which they serve, especially if there is a natural disaster like an earthquake, which requires immediate and coordinated emergency response. In recent years, employers in downtown Vancouver have increasingly stated that housing affordability challenges have affected their ability to recruit and retain staff,” Clifford’s letter states.

While “the creation of rental housing remains a priority”, according to an emailed statement from the City of Vancouver, no rental properties, affordable or otherwise, have been started in Vancouver’s downtown in the past 18 months, according to the latest data from Canada Housing and Mortgage Corp.

“The new framework will allow Reliance Properties application to be considered,” the city statement added.” This is aligned with the city’s goal to clear our existing backlog of project proposals and encourage for-profit and non-profit housing developers to build more of the affordable housing we need.”