Milestone reached as 1,150-kilometre project burrows into the final link from the Alberta oilsands to tidewater
Jul 14, 2021 12:50 PM By: Nelson Bennett, Business in Vancouver 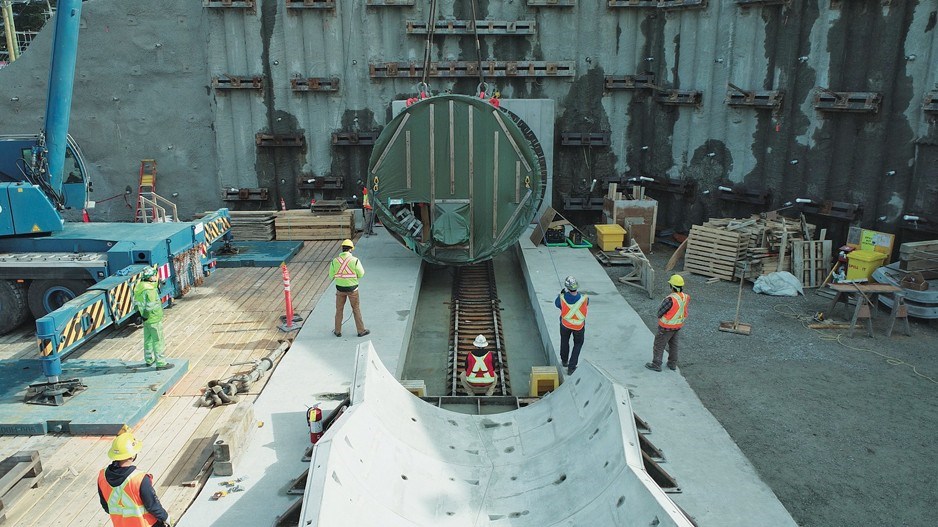 The tunnel through Burnaby Mountain will link with tank farm and marine terminal. | Trans Mountain Corp.

Twinning a 1,150-kilometre long pipeline is no mean feat of engineering, especially considering that the last 2.6 kilometres pipe has to be threaded through a mountain.

The $12.6 billion Trans Mountain pipeline twinning project is one of four major energy-related construction projects underway in B.C. It will add a second pipeline to the existing one, which runs from Edmonton to Burnaby, increasing its capacity to 890,000 barrels per day from 300,000.

A total of 13,000 people have been hired since construction started. At the end of May, the project alone accounted for 9,000 workers in Alberta and B.C. About 1,900 are concentrated in the Lower Mainland, with much of that manpower focused on expansions of the Burnaby tank farm and Westridge Marine Terminal.

“The terminals are really some of the big meat of the work,” said Trans Mountain Corp. manager of communications Ali Hounsell in a recent progress update. “Overall, we’re at just over 30 per cent complete on the project, and that’s as of mid-June. We have 182 kilometres of pipe in the ground. The completion rate really varies spread by spread.”

The pipeline-twinning project is broken into nine sections or “spreads.” Spread 1 out of Edmonton is 94 per cent complete, whereas work on the Fraser Valley – Spread 6 – hasn’t even started yet, as the company is still waiting for the Canadian Energy Regulator to issue permits from detailed route hearings.

Much of the work is being done by Canadian contractors, although there are a few points along the pipeline’s route that pose some engineering, geotechnical and construction challenges that require expertise not found in Canada.

Burying a pipeline in the steep mountainous terrain between Hope and the Coquihalla Summit, for example, requires international technical expertise and specialized equipment. For that section, Trans Mountain has contracted Kiewit and an Italian company, Bonatti.

“We’re running grades of 30 degrees up there,” said Dean Palin, head project director for the TMX project. “So we brought in Kiewit Bonatti Group to help us get through the steep slopes on that piece of it.”

Trans Mountain also brought in specialized marine barge-crane operators from the U.S. to work on the foreshore of Westridge Marine terminal.

One of the bigger engineering challenges is boring a 2.6-kilometre tunnel through Burnaby Mountain. A major milestone in the project’s construction was achieved May 26, when tunnel boring officially began. The tunnel is needed to connect the Burnaby tank farm and Westridge Marine Terminal with distribution lines.

The Burnaby tank farm is being expanded with 14 additional storage tanks. The Westridge Marine terminal, where oil is loaded onto tankers for export, involves the construction of three new berths. This requires the installation of 162 piles, and all of this has to be done in the water around the terminal without interfering with ongoing operations.

The marine terminal and tank farm are more than two kilometres apart and are connected by distribution pipes that were originally put underground in the 1950s. Since then, the City of Burnaby has built up around that area. So rather than tear up city streets to install new distribution pipes to connect the Burnaby tank farm and Westridge Marine Terminal, planners decided to bore the long tunnel through Burnaby Mountain.

The tunnel boring took a year of preparatory work and six years of planning, design and regulatory approvals. The prep work included building entrance and exit portals at either end, which required the construction of retaining walls at the Burnaby tank farm and Westridge Marine Terminal.

This involved 106 secant piles being sunk 18 metres deep into the ground at the marine terminal end. About 300,000 cubic metres of soil then had to be excavated in front of these piles to reveal the new retaining walls, and then a platform was built for the tunnel-boring machine. Another small retaining wall was built at the Burnaby Tank farm end.

The boring began with cutting a 4.4-metre entrance into the new retaining wall near Westridge Marine Terminal.

Chewing through a mountain requires specialized machinery. A custom-built tunnel-boring machine was built by Herrenknecht AG in Germany at a cost of about $10 million. The machine is 122 metres long – the length of a soccer field – and is operated by a crew of 12, who work inside the machine.

The machine operates seven days a week, 24 hours a day. It will take about 290 days to complete the tunnel. As of the end of June, only about 25 metres of the tunnel had been excavated.

“Right now, we’re not moving very fast, because as we slowly start to wind this machine up, we’ve got commissioning that’s ongoing, making sure everything’s right before we get too far into the tunnel,” Palin said.

The expansion project has suffered a number of delays and stop-work orders. Some of the delays were due to the pandemic, but there was also a three-week halt-work order issued by Trans Mountain in December, after a number of workplace injuries, including one fatality.

“It’s such a huge project, and we’ve had some challenges,” Hounsell said. “We had a clearing stop-work order a little while ago. COVID obviously has been a challenge in many different ways, but in some other ways we catch up. Overall, we are still projecting for completion at the end of 2022.” •