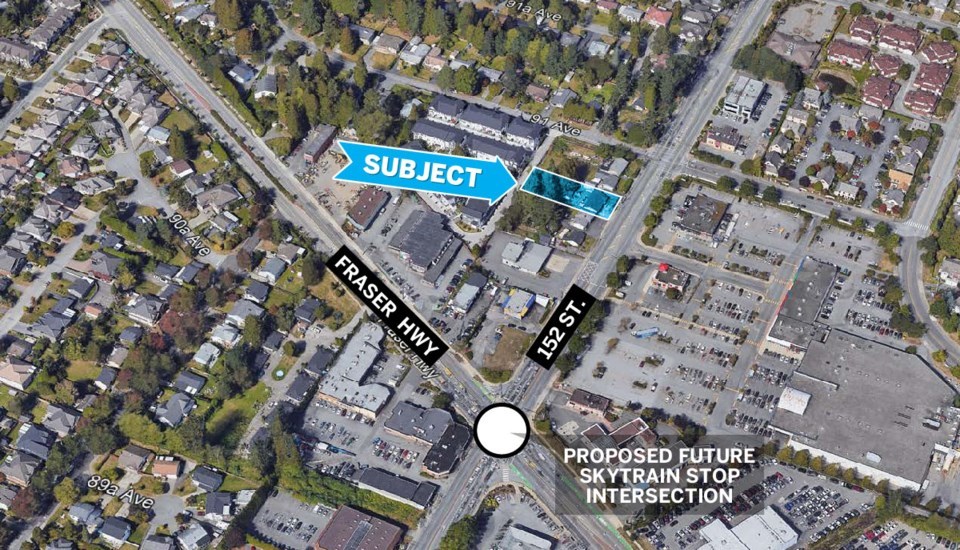 The extension of Metro Vancouver’s SkyTrain system from downtown Surrey to Langley has clinched $1.3 billion in additional funding from Ottawa.

Now SkyTrain to Langley is real and the speculation that drove land prices higher in the new transit corridor may prove prophetic.

Two years ago, when developer Beech Westgard acquired 150 acres in the Anniedale-Tynehead area of Surrey – in the path of the SkyTrain – and began to install $35 million in infrastructure on its own dime, land prices in the area were in the $2.6 million per acre range.

At the time, real estate agents were forecasting prices in the corridor could reach $3.5 million per acre by 2021.

Instead, some land prices had already rocketed above $4 million per acre this year even before the final SkyTrain extension funding was announced, based on Western Investor Done Deals.

A 0.88-acre land assembly on 112th Avenue Surrey close to a SkyTrain station sold this February for $2.29 million.

In March, a quarter-acre lot near a proposed SkyTrain station at 152nd Street and Fraser Highway in Surrey sold for $2 million, the equivalent of about $8 million per acre.

In April, a six-lot land assembly of less than acre on 53rd Avenue in Langley sold for $6.53 million.

In mid-June, a 1.2-acre site in Langley near the planned SkyTrain terminus sold in two days for $3.8 million.

In early July, just prior to the funding announcement, a 0.61-acre land assembly in Surrey two blocks from the central SkyTrain station sold for $4.1 million in a deal brokered by Rick Toor of HomeLife Advantage Realty.

The SkyTrain extension features 16 kilometres of elevated train tracks running from downtown Surrey to Langley city centre with eight stations in-between, most of which are being eyed for higher-density development.

“We’re cutting pollution and creating jobs for the people of B.C.,” he said outside Surrey City Hall.

“We will be matching the dollars that are on the table from the federal government to continue and conclude the line all the way out to UBC. These are critical investments, they need to be phased in,” B.C. Premier John Horgan said at the funding announcement.

Surrey Mayor Doug McCallum said a SkyTrain extension in Surrey “has been a long time coming.”

“The rapid transit project will connect people south of the Fraser to more housing, employment, skills services, encouraging higher density, mixed-use development all around those SkyTrain stations,” he said at the announcement.

It could also mean millions of dollars for City of Surrey coffers. The city plans to tax a 50 per cent to 70 per cent share of the ‘land lift’ in land values related to the SkyTrain extension.

—With files from Graeme Wood and Tyler Orton, Glacier Media