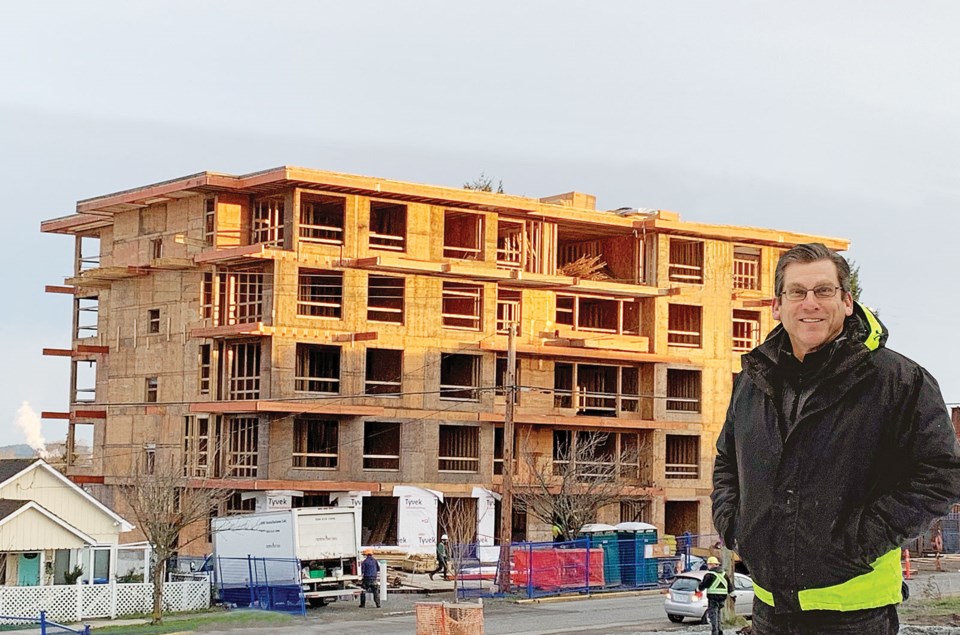 Mike Parker, president of Parkshore Projects Ltd., with the first of 280 condominiums and retail space he is developing in South Nanaimo: “I am bullish on Nanaimo,” he said, “It is running under the radar.” | Submitted

Canada is seeing record levels of immigration with an estimated 427,000 newcomers arriving in all of 2019. In the third quarter of last year, B.C. welcomed 16,909 people, a 72.5 per cent increase from the same period a year earlier.

As well, 14,857 Canadians moved to B.C. from other provinces in the same three-month period, up nearly six per cent from a year earlier.

About four per cent of immigrants to B.C. settle on Vancouver Island and the Island is also attracting more Canadians who are drawn to the warmest winter climate in the country. Many of these are retirees, which has resulted in the Island having the highest ratio of seniors in the country. In Qualicum Beach, for example, 50 per cent of the population is over the age of 65, making it the most elderly community in Canada.

Partially due to this tsunami of retirees, the population of the central Island alone is forecast to swell past 500,000 within the next 10 years, from 460,000 today, according to BC Stats.

Much of the current growth is seen in Greater Victoria, which consistently attracts about 5,000 people every year. This is reflected in the current rental vacancy rate of 1 per cent, among the lowest in the country and down from 1.4 per cent a year ago. The average rent for a two-bedroom apartment is up 3.4 per cent to $1,448 a month, according to the latest data from Canada Mortgage and Housing Corp.

Rental demand is driven in part by an expanding high-tech employment base and the large number of university students and staff.

“A one-per-cent vacancy rate is basically telling the renting community there is almost no supply,” said Reilly. CRD data has shown rents rising about 20 per cent in the past three years, Reilly said.

More new rentals are being built, with about 630 units under construction, 602 of which are in Langford, with others in Saanich and the city of Victoria, but apparently fall short of demand.

Some Island residential developers are looking north from the capital because of lower costs and speedier permit approvals. Nanaimo, the Island’s second-largest city, is often their first bet.

“When you look at B.C. cities with good infrastructure and amenities, it is hard to find the value that you see in Nanaimo,” said Mike Parker, president of Parkshore Projects Ltd. “Nanaimo is running under the radar.”

Parker, formerly of North Vancouver, and partner Bill Xing of Burnaby, bought a commercial site two years ago on the southern edge of downtown. The land is being developed into a series of low-rise condominium buildings and 12,000 square feet of retail space.

The first building, with 35 condos, has already sold out and the second building is released this month, with 76 units. The condo prices start at $159,900 and range up to $439,000 for two-bedroom units. All the homes have ocean views. Parker expects to complete about 280 homes during a five-year build-out.

A more expansive development is proposed for 421 acres of undeveloped land within the city of Nanaimo. The land is adjacent to the Duke Point industrial area and its harbour, and the owners have submitted a bid to have it rezoned into one of the largest industrial sites on the Island.

The sprawling acreage includes 3,200 feet of shoreline and could include light and heavy industrial, office space, public areas and green space, according to Randall Taylor, vice-president of NAI Commercial in Nanaimo.

Taylor said the land has been approved by the city for future development resort zoning that could include 2,000 homes.

“Recently the City of Nanaimo has recognized the need for more industrial land so has offered planning support for a change of use of this land to industrial,” he said. “The owners are currently working on both options for development of the land.”

Active non-residential projects in Nanaimo include a $12 million private medical office complex and a $15 million expansion project at the Nanaimo Airport. The Port of Nanaimo has launched a $34 million upgrade that will increase marina capacity by more than 50 per cent.

Farther up in the Comox Valley, the former Kensington Island Properties development, which shut down nearly a decade ago, has been revised as Union Bay Estates, which could become the largest Island real estate development north of Victoria. Plans call for more than 2,900 homes on the 349-acre site, in a number of phases, if everything goes as planned.