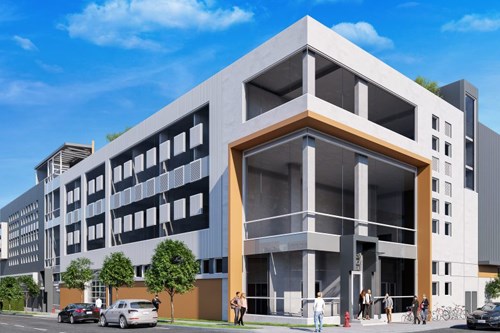 While a shortage of well-located and readily developable industrial land has plagued municipalities from Vancouver to Chilliwack, panellists also noted that there wasn’t yet enough pressure to force developers to build multi-storey industrial buildings. In short, so long as it’s still cheaper to build out, industrial space won’t be growing up.

Despite having a dozen multi-storey industrial projects on the go, Taylor Kurtz Architecture + Design Inc. president Craig Taylor said he doesn’t think the market as a whole is ready to embrace the form. The land-constrained industrial markets of Vancouver and Burnaby are showing potential but the costs are rising. This is true for developers and occupants alike.

“Our clients are generally telling us that the pro formas just don’t quite stack up – pardon the pun – when you compare the costs to large tracts of land that you’ve got in Campbell Heights and the [Fraser] Valley,” he said.

Ben Taddei, COO of the Conwest Group of Cos., shared Taylor’s view.

With land costing $2.5 million to $4.5 million an acre, and construction costs running $300 a square foot, Taddei said total project costs could end up being upwards of $500 per square foot.

“I think it will be a while before you see that built form,” he said. “Until the market runs out of industrial land for large-bay [facilities] and those prices become so horrendous that the alternative is to pay more for stacked product, I don’t think you’re going to see it.”

Colliers International is more bullish on the future of the form, however.

“While the 22-storey industrial facilities of Asia are unlikely to be seen springing up across Vancouver any time soon, densification of industrial sites is a trend that shows no signs of abating,” the report states. “There are simply too many factors driving the push to go vertical.”

A report he wrote six years ago for Metro Vancouver pointed instead to the four-storey Asia Airfreight Terminal in Hong Kong, which has 1.8 million square feet, as a better example.

Closer to home, it’s matched by the three-storey Georgetown Crossroads facility in Seattle, which Colliers expects will set the pace for future multi-storey industrial projects in Vancouver.