A $350-million industrial development in Richmond is ready to begin construction once first tenants have signed on
Aug 10, 2017 2:05 PM By: Frank O'brien 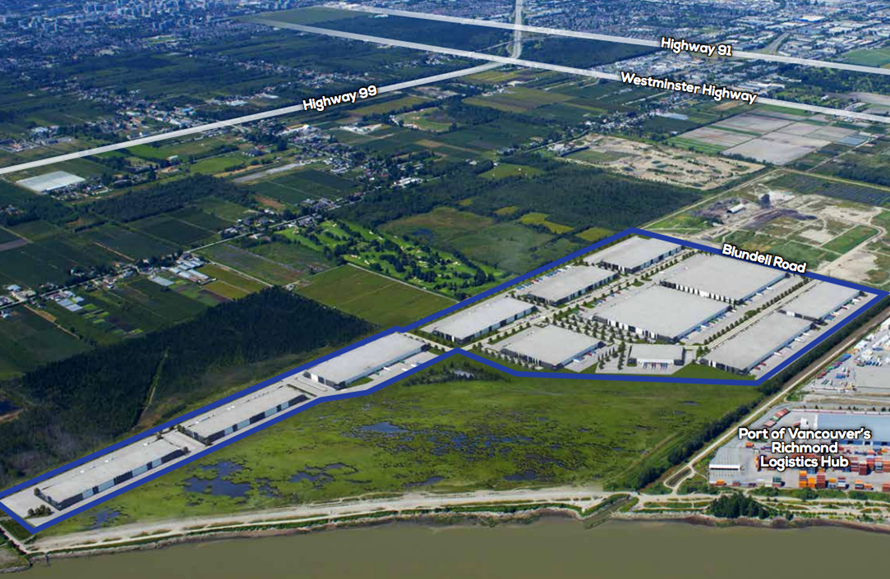 Site preparation for a $350 million, 170-acre industrial development in Richmond – said to be the largest industrial park to be built in Metro Vancouver – has begun but construction won’t start on its one-million-square-foot Phase 1 until the first tenants have signed on.

“We aren’t building on speculation,” confirmed Tom Land, CEO and president of Montrose Properties Ltd. of its Richmond Industrial Centre, though he concedes it wouldn’t be much of a gamble in one of Canada’s biggest and tightest industrial zones.

Richmond has 37.3 million square feet of industrial real estate, the most of any Metro Vancouver municipality, but only 2.1 per cent of it is vacant, according to Colliers International.

Aside from the Richmond Industrial Centre, more than three million square feet of competing space is either proposed or under construction in Richmond. Much of it is speculative, but none of the 20 other projects are on the scale of Montrose’s first industrial play.

“It is certainly ambitious,” Land said, but he noted there are several factors in its favour.

First, Montrose has owned the site for 35 years through its Ecowaste Industries Ltd. subsidiary in an area where raw industrial land can cost $1 million an acre. Second, it has partnered with Omicron, one of the largest and most respected industrial developers in Western Canada.

“Our partners share our vision of a long-horizon investment,” Land said. “We are in a very comfortable space.”

Richmond Industrial Centre will be a build-to-suit, three-million-square foot development, where each of its 12 buildings will be custom-finished for tenants.

Phase 1 will have two 500,000-square-foot buildings, and Land expects them to be claimed as logistics warehouses, likely for the retail sector, and probably by single tenants.

The design is for 32-foot-high ceilings, but Land said they could be raised to 36-foot clear heights.

“Richmond Industrial Centre is zoned for a broad range of industrial uses,” said Stuart Morrison, leasing agent for the project with Colliers, “and we certainly expect to accommodate manufacturing, processing, fabrication and local distribution businesses.”

Land estimated that site preparation alone for Phase 1 site will cost approximately $80 million. This includes site servicing, building a two-lane bridge to link the project with Blundell Road and pre-loading the former peat bog with river sand to a depth of nine metres (30 feet).

Once complete, the centre will also include a network of pedestrian and bike paths for employees and the community.

If Colliers finds the tenants, the first Richmond Industrial Centre building could be available as early as fall 2018.