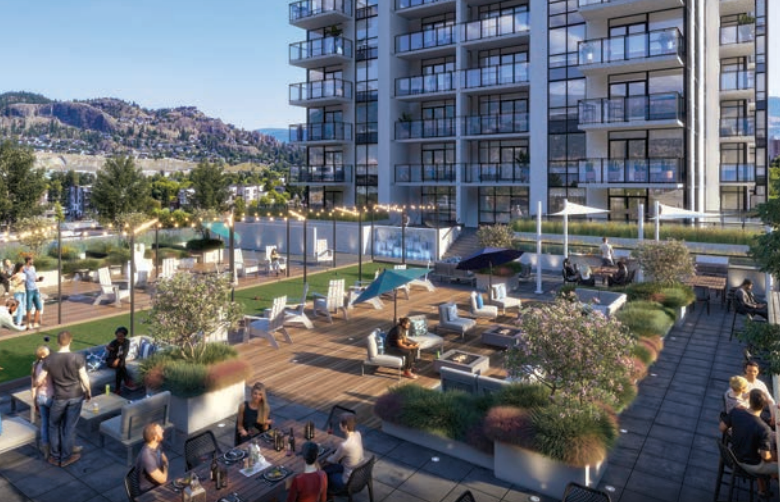 Mission Group, the largest developer in the Central Okanagan, has launched a new 34-storey condo tower in downtown Kelowna that, while marketed as lifestyle choice, has all the earmarks of a rental investment opportunity.

The second residential tower at the Bernard Block complex, the Bertram building, will feature 257 homes ranging from studios to two-bedroom suites, with prices starting in the mid-$200,000 range.

The master-planned community is a three-minute walk from the future University of British Columbia Okanagan (UBCO) downtown campus that was approved this summer.

Since UBCO opened in 2005, its student population has swelled from 3,000 to more than 11,000 and is forecast to double over the next two decades.

Meanwhile, the Kelowna rental vacancy rate is around 2.5 per cent and rental rates, at average of $1,345 for a one-bedroom, according to rentals.ca, are the second-highest in B.C. outside of Metro Vancouver.

Luke Turri, executive vice-president of Mission Group, noted that the Betram tower is near downtown boutique shops, coffee shops, local restaurants, urban wineries, craft breweries, and farmers markets, resulting in a walking score of 98, in the downtown core.
“This is what makes this a great home and great investment,” he said.

In August, housing sales in Kelowna increased 39.2 per cent compared to a year earlier, the second-highest increase in the province, trailing only the South Okanagan.

“We are still seeing high sales activity despite a lack of inventory,” says Okanagan Mainline Real Estate Board president Kim Heizmann, adding that “we are at a stage where inventory is struggling to catch-up to the demand.”

The average composite home price in the Okanagan Mainline, which is dominated by Kelowna is now $636,400, up 23.4 per cent in August, or more than double the average B.C. year-over-year price increase of 12.7, per cent according to the B.C. Real Estate Association.