Homebuilding dip seen as a harbinger of downturn

A sudden drop in residential permits combines with fear among more than half of homebuyers that the market is now priced out of reach
Jun 7, 2021 10:08 AM 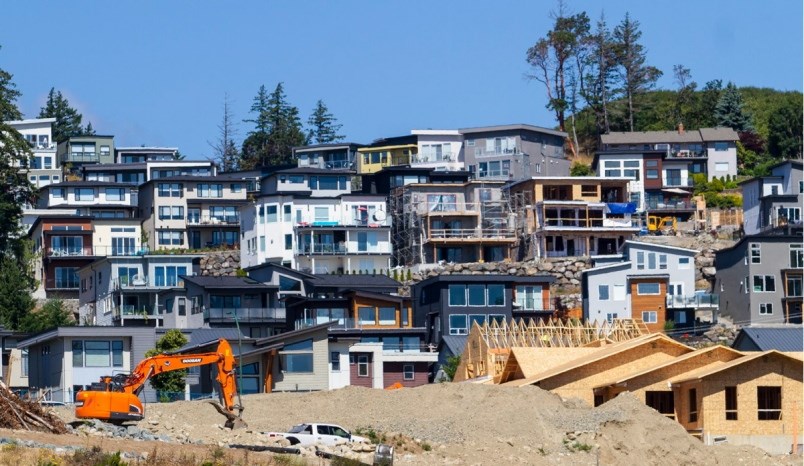 New housing being built in the Colwood community of Greater Victoria in 2020. | Darren Stone, Times Colonist

A recent survey of Canadian homebuyers showing that more than half say they are now priced out of their local market, combined with a sudden drop in homebuilding, could be signals of a looming downturn in the housing market, experts contend.

Housing bubbles have been a leading indicator in 11 of the 14 economic recessions since 1929, notes a Nobel laureate and economist and, he says, a slowdown in residential construction is a consistent early signal.

Vernon L. Smith, awarded the Nobel Prize for Economics in 2002 for his work in empirical economic analysis, is a professor at Chapman University in California and president and chair in finance at the International Foundations of Research in Experimental Economics. He last spoke in Vancouver to a packed house seven years ago at an event presented by Simon Fraser University and the Bank of Montreal.

Smith, now 94, who recalls his family’s Kansas farm being foreclosed in 1934, said a downturn in the housing market was precursor to the Great Depression, the 2006 “great recession” and virtually every other recession in-between.

Residential developers, he said, are much more aware and reactive to changes in the market than typical homeowners or buyers.

Early in 2006, starts of U.S. housing suddenly began falling from record highs while all other economic indicators were still increasing, Smith noted. A year later, home construction had virtually stopped, U.S. home equity had shed $500 billion in value and the world was in the grip of the worst economic crisis in 100 years.

In April, 2021, despite a roaring housing market, the total value of residential building permits issued in Canada pulled back from a peak in March, led by double-digit declines in British Columbia and Quebec, according to the latest data from Statistics Canada.

More than $7.7 billion in residential permits were issued nationally in April, down 6.7 per cent from a record high of more than $8 billion in March.

Month-over-month declines in B.C. ,down 23.7 per cent, and Quebec, where permits fell nearly 15 per cent , contributed most to the downturn.

The sudden slump in residential permits coincides with a new Canada-wide survey that shows more than half of Canadian homebuyers believe home prices have now soared beyond their reach.

The Point2Homes survey, released June 7, found that while 38 per cent of respondents want to buy a home, 44 per cent did not know when they could actually do so.

More than half (53 per cent) stated that they couldn’t keep up with the fast-changing price tags.

Likewise, many respondents stated that they felt dispirited or ready to give up. Some had even put their home-buying plans on hold, the survey found.

The Point2Homes online survey was conducted from March 15 to April 5, 2021 and included 2,637 respondents from across Canada.

Central One credit union is warning of a housing downturn, which it said could start in the second half of this year. This downward trend will continue in 2022 with a 21 per cent contraction to 89,000 home transactions, according to Central 1 deputy chief economist, Bryan Yu in his latest B.C. Housing Outlook: 2020-2022.

The BC Real Estate Association is forecasting that, after a “record smashing year” in 2021, housing sales will plunge more than 20 per cent in 2022, and price increases will fall to single-digit levels.

Smith cautioned that a huge inflow of mortgage credit started the last housing bubble and he sees parallels today in low-cost mortgage money. In an interview with Western Investor in 2014, the award-winning economist had conceded that experts were “blindsided” by the last recession and don’t know when the next one will appear.