Developing in peat bogs and over landfills, sweetening zoning bids and paying record-setting prices for shovel-ready sites continues to pay off
May 4, 2021 10:29 AM By: Frank O'brien 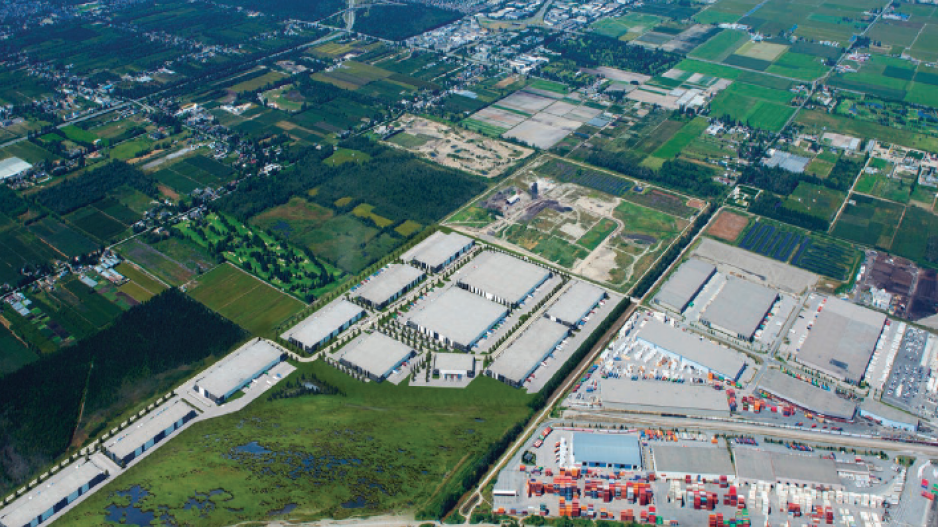 As the industrial land base in Metro Vancouver vanishes beneath concrete and asphalt, developers are throwing a wide net in their search for more space to meet intense demand that has driven industrial lease rates to the highest level in Canada.

One $300 million major project is rising above a Richmond landfill, another is bucking protest as it forges ahead with plans for 163 acres in a Delta peat bog while multiple bids are driving up land values from Vancouver to the eastern edge of the Fraser Valley.

In November 2020, developer Wesbild paid more than $12 million per acre for the former Sen Western Wholesale Lumber site on Manitoba Street in southwest Vancouver. The $59.9 million transaction was the biggest industrial land sale in the past 12 months, according to Avison Young, but it was not the only Vancouver deal with eye-popping prices.

“The shortage of industrial space available for lease combined with a near record-low cost of capital have driven many owner-occupiers and investors to heavily invest in B.C. industrial properties,” according to Avison Young’s Metro Vancouver Industrial Overview, released May 3.

The report found that industrial asset sales totalled more than $1.5 billion in 2020 (on assets valued at more than $5 million) and hit $575 million in the first three months of 2021 alone.

According to the Metro Vancouver 2020 Regional Industrial Lands Inventory, 82 per cent of the 28,422 acres of industrial land that was available five years ago has now been developed.  Since 2016, industrial development has averaged more than three million square feet a year, and that pace accelerated to 4.4 million square feet annually in the past two years.

The overall industrial vacancy rate in Metro Vancouver, however, is 0.9 per cent, and it drops even lower in traditional powerhouse markets like Surrey, Richmond and Burnaby

As Avison Young noted, three current developments in Metro Vancouver highlight the perseverance of industrial developers trying to keep in the game. These are:

• Xchange Business Park, in Abbotsford, which entails 140 acres, will deliver 1.2 million square feet in its first phase of speculative construction. It required significant investment from developers QuadReal Property Group and Hungerford Properties in transportation infrastructure to improve access to the site. The developers will also transfer 28 acres to the City of Abbotsford for use as parkland as well as donate an additional 23 acres of riparian areas while also maintaining wildlife corridors running north and south through the property.

• Beedie, the largest industrial developer in B.C., plans to turn the former Pineland Peat site, a 163-acre property in Delta, into an industrial park. The bid remains in the approval process involving a substantial number of government stakeholders and will require the redevelopment of a highway interchange and several other transportation infrastructure improvements in the area.  The peat bog development has raised protests from local environmentalists.

• In Richmond, a 170-acre site that was once used for construction waste landfill is being converted into a $300 million industrial park by Montrose Property Holdings. The resulting Richmond Industrial Centre will include 12 to14 buildings ranging from 100,000 square feet to 500,000 square feet when completed. The first building opened in September 2020.

In Chilliwack, 2.5 acres of industrial land sold March 31 for $5.5 million, considered a record high per-acre price in the municipality, according to broker Dmytro Chernysh of Klein Group-Royal Lepage.

Despite the rapid pace of construction, spec developers apparently have no trouble finding buyers or tenants.  According to Avison Young 82 per cent of the 1.8 million square feet of industrial space that will complete in the next six months has already been either leased or sold as strata.