British Columbians will be going to the polls despite – and perhaps because of – a global pandemic
Sep 21, 2020 1:25 PM By: Nelson Bennett 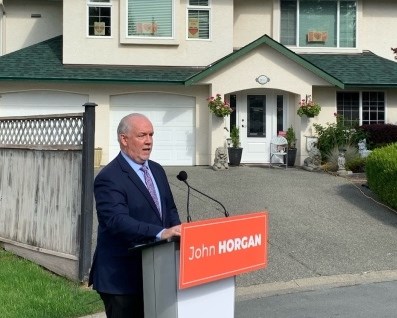 NDP Leader John Horgan confirmed September 21 what had been speculated for the past two weeks: he will capitalize on his high approval rating, and the weakness of the Greens and Liberals, to secure a majority for his NDP government in British Columbia.

He has met with the lieutenant governor and received assent to call a general election for October 24, Harcourt told a press conference in Langford this morning.

"I want everyone to know I have struggled mightily with this decision, and it did not come easy to me," Horgan said.

He cited the COVID-19 pandemic, and the need to address it, as one of the reasons for calling an early election.

"This pandemic will be with us for a year or more, and that's why I believe we need to have an election now," Horgan said. "We can either delay that decision and create uncertainty and instablility over the next 12 months -- more speculation, more talk about what might be -- or we can do what I believe is always the right thing and that's ask British Columbians what they think."

Horgan's NDP did not win the last election. The party won fewer seats than the BC LiberaIs, but Horgan was able to convince the lieutenant governor that he could form government, with the help of the Green Party's three members, who signed a confidence and supply agreement that allowed the NDP to govern.

In calling a snap election, Horgan is violating B.C.'s fixed election statute. In 2001, the former BC Liberal government enshrined fixed election dates into the Constitution Act. The next provincial election should be held in October, 2021.

The Horgan government's handling of the COVID-19 pandemic has resulted in high approval ratings, so Horgan is no doubt banking on that to secure a majority, and free his government from the Green Party's influence.

The Greens are currently down to two sitting MLAs, as former Green Party leader Andrew Weaver now sits as an independent and is not seeking re-election.

Horgan's decision to call a snap election is already being charcaterized as a cynical "power grab." After all, there has been unprecedented cooperation by opposition parties, at least in terms of passing emergency spending and other measures related to the pandemic.

But Horgan said in recent weeks, the Green Party has not supported a couple of proposed pieces of legislation, which is one of the reasons he hopes to secure a stronger mandate from the electorate. One was a measure that would give physicians the power to keep minors who overdosed on drugs under medical supervision for one week. It failed to pass, Horgan said.

"There were people in the Legislature that did not support that, and having met parents that lost children, I was not prepared to accept that," Horgan said. "That was really the deciding issue for me.

As "Machiavellian" as Horgan's snap election may seem, Richard Johnston, political science professor at University of BC, thinks Horgan stands a good chance of winning a majority, partly because of the weakness of both the Green Party in general and BC Liberal Leader Andrew Wilkinson.

"The Greens have all along been a kind of a fake party," Johnston said. "They just caught some breaks this time. The Liberals have disappeared from view, and their return to visibility may not help them very much because Wilkinson just doesn't seem to have the jam.

"It's cynical today, but once the election begins, he has a record to run on, and the others don't particularly."

He added, however, that, at least federally, the record of snap election calls has not been good to incumbents. In general, frontrunners lose ground in snap elections, he said.

However, he added that Horgan's track record before the pandemic is generally strong.

"The NDP have strength in their case, generally, even before the pandemic, in the sense that they governed competently," Johnston said.

The fall election campaign will be like no other, as pandemic restrictions means traditional stumping won't be allowed. Candidates will not be door-knocking and there won't be town-halls and local public candidate debates. It will be a mostly virtual campaign, and many voters will be voting by mail.

Horgan said he is confident that, with the guidance of provincial health officer Bonnie Henry, Elections BC can ensure a "safe" election.

Parties have less than three weeks to have all their candidate nominations filed with Elections BC.