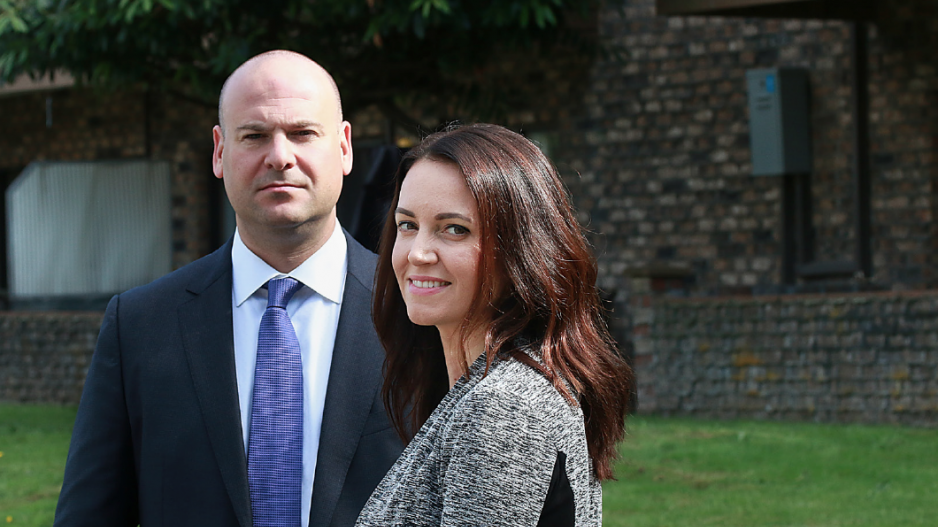 Apartment realtors Mark Goodman and Cynthia Jagger in front of a West 14th Avenue apartment. According to Goodman, many veteran Vancouver landlords are selling out in the face of soaring taxes and rental income restrictions. Photo Rob Kruyt/Business in Vancouver


In the past few weeks, landlords have besieged Mark Goodman, a multi-family specialist with Vancouver’s Goodman Commercial Inc., wanting to list their properties for sale, including rare portfolios in Vancouver’s hottest rental neighbourhoods.

“This is unprecedented,” said Goodman, who has been selling rental apartment buildings for 18 years.

He said most of the potential sellers are local families that have held rental property for years. Now, he said, many want to get out of the market, even with Vancouver rents at historic highs and the city’s vacancy rate the lowest in Canada.

Goodman expects to have two dozen within weeks. Current listings include a four-building portfolio in the South Granville area, totalling 114 suites that the longtime owners have listed for the first time.

Each sale is individual, but Goodman contends they are fuelled by an underlying frustration with provincial legislation that caps rent increases at 2.5 per cent this year, combined with soaring property taxes, based on assessments that are now often higher than the buildings could sell for.

For example, BC Assessment has valued an aging 16-suite, walk-up apartment building on Bute Street in Vancouver at more than $10.9 million, with the land alone assessed at $10.3 million.

Goodman has it listed at a discounted price of $9.25 million.

The owner of a 44-suite building on Balmoral Street put it up for sale this month after annual property taxes hit $50,000, based on a spike in its assessed value to just under $19 million resulting from an $850,000 increase in assessed land value from a year earlier.

Because BC Assessment values land at its highest possible use, property taxes for Metro Vancouver landlords have increased as much as 25 per cent in the past year. But Goodman said landlords are restricted in how much they can raise rents and even in how extensively they can renovate their buildings.

He added that some of the older rental apartment buildings — the average age in Vancouver is 61 years — have a majority of long-term tenants who are paying rates well below market value.

Under the City of Vancouver’s new Tenant Relocation and Protection Policy, if a landlord evicts a tenant to make way for substantial renovations, a person who has lived in the apartment for more than 20 years is entitled to a full year of rent, paid for by the landlord. Someone who has rented an apartment for between one and five years is now entitled to four months’ rent.

Goodman said some of the older buildings are “falling apart and unsafe,” but landlords can’t afford to fix them because of the penalties for “renovictions.”

The recent spike in apartment listings marks a sharp reversal from earlier this year.

In 2019’s second quarter, Metro Vancouver rental apartment building sales fell 66.7 per cent to just 13 compared with the same period a year earlier. The dollar value of sales was $152 million, down a staggering 73.9 per cent from 2018’s second quarter, according to the Real Estate Board of Greater Vancouver’s commercial division.

Goodman said the current rush of listings, which other agents are also experiencing, represents a “changing of the guard” in the Metro rental market.

But Goodman added that they are looking mostly at new buildings or large portfolios. There is still a local appetite for one-off, older buildings, but he said sellers might have to discount prices.

Goodman added that foreign buyers have expressed interest in Vancouver buildings but are put off by B.C.’s 20 per cent foreign homebuyer tax, which applies to rental apartment buildings.

“The taxes are just crazy. Some owners have simply had enough.”