Foothills County has killed $10 million plan for High River Toyota to open new dealership on the outskirts of Okotoks
Sep 29, 2020 9:03 AM By: Krista Conrad,Okotoks Western Wheel 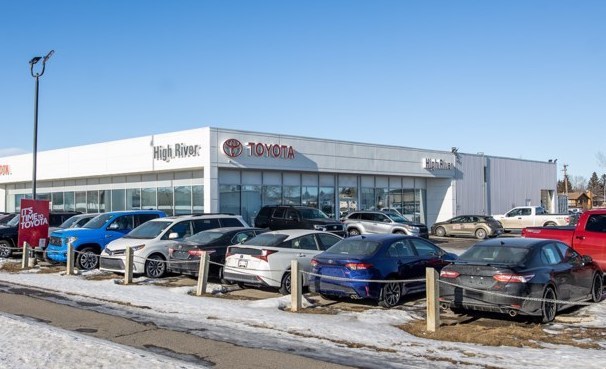 High River Toyota will not be spending $10 million for a new dealership near Okotoks, a bedroom community 18 km. south of Calgary.

With a 4-3 vote, Foothills County turned down an application that would have seen the dealership relocate to Highway 2A, just north of the Town of Okotoks and near existing dealerships Okotoks Honda and Okotoks GM.

After the hearing on September 16, High River Toyota general manager Greg Woodward said he was disappointed by the decision after working with and being put off by the County since last August.

“It’s disappointing that we waited this long for a decision to be made,” said Woodward. “We really thought we had a good proposal to work with the residents in the area. We tried to address all their concerns.”

Some of those concerns included sound attenuation, screening with trees and landscaping, ensuring lighting met with the County’s dark sky bylaws and covering the costs of highway intersection improvements like putting in traffic lights pending Alberta Transportation approval, and developing test-drive routes that would divert customers to the highway rather than residential roads in the area.

However, those efforts were not enough for the County residential property owners who spoke out in opposition of the development citing increased traffic and noise, a potential rise in crime and visual impact of the business during both public hearings.

Coun. Alan Alger, who represents the neighbourhood where the application was located, made the motion to deny further readings of the land-use redesignation for the Toyota dealership.

“It speaks to the passion of the rural lifestyle,” said Alger. “I don’t believe one acreage between a major business like a car dealership and another acreage is enough of a buffer.”

He acknowledged arguments the dealership would fit into the area because of existing businesses along the corridor, including two dealerships, the SAVE veterinary clinic, StorageMart, Edison School and the Okotoks Farmers' Market, but said the increased traffic would be significant compared to those businesses.

“This corner is going to develop, but they’re [the residents] going to fight back on everything,” said Alger. “They don’t want the lights and obtrusive building and traffic, and a 30-foot [inflatable] gorilla holding a for-sale sign on Saturday afternoons.”

Coun. Delilah Miller saw things from a different perspective, noting the corridor has other commercial development already in place. She questioned whether residents would have preferred to see a dealership there or one of the other possible businesses outlined in the current land-use, which could range from a hotel to industrial operations.

“This area certainly is slated for that type of development,” said Miller.

She added part of the job of elected officials is to look out for not only what’s best for their area residents but for the County as a whole. Having a major commercial endeavour like Toyota would broaden the tax base for Foothills, she said.

While she admitted there could be other locations in the municipality for Toyota to look, Miller said there are other implications involved such as the ability to acquire land and whether other locales make financial sense for the business.

She wondered whether the business would look elsewhere in the County if it’s current application was turned down.

The sentiment was shared by Coun. Rob Siewert, who said it’s important to look at what turning away Toyota could say about the municipality.

“We did give them first reading and if we now yanked the carpet out from under them then it does certainly send a signal to other business that they have no certainty when they apply at Foothills, and I would hate to see that kind of reputation happen,” said Siewert.

The proposed location had been an ideal spot, because it was situated in the middle of the dealership's client base, which is primarily from Calgary to High River, he said.

“There are other opportunities for us,” said Woodward, speaking for High River Toyota.

He said the frustrating part was waiting for nearly one year and going through two public hearings to be turned down so far along in the process.

The facility would have been a $10-million investment in the County with a company that is conscious about its environmental impact, he said.

“We’re actively looking at other locations,” said Woodward. “It stings, but we’ll pick up and move on. We’ll find something else that’s going to fit the bill and away we go.”