"This is not just about Alberta... Hundreds of thousands of Canadians depend on the energy sector for their livelihood"
Mar 11, 2020 7:01 AM By: Nelson Bennett 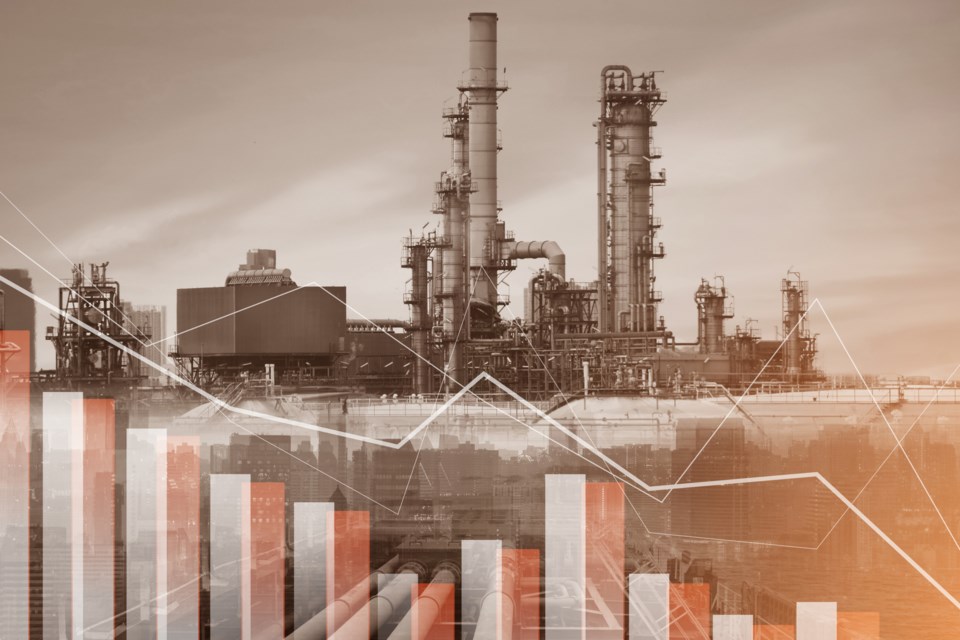 Canadians will enjoy lower gasoline prices in the wake of a dramatic oil price plunge. But other than that, it’s going to be bad news all around for the global economy.

And Canada may suffer disproportionately, due to some self-inflicted wounds.

The failure of OPEC and Russia to agree on production cuts in response to the COVID-19 virus’ impacts on China’s economy triggered a 30 per cent drop in global oil futures that shocked global stock markets March 9.

The Canadian crude oil index dropped 29 per cent Monday to US$19.81 per barrel, while West Texas Intermediate dropped 21 per cent. Billions in market value were wiped out for major oil and gas companies in a single day of trading.

The oil price crash pushed the Toronto Stock Exchange to a 14-month low on March 9. Canada’s loonie, which has been described as a petro-dollar that tends to move with oil prices, fell to a three-year low, and Canadian resource companies saw massive declines in their market value.

“The challenge posed to this province, and to Canada, could not be more serious,” said Alberta Premier Jason Kenney, who added that his government might have to reconsider plans to balance its budget, and go into deficit in order to stimulate the economy through increased spending on infrastructure.

“I understand this is the first time since 1930 that the world has seen a significant decline in energy demand met concurrently with a significant increase in energy supply. We are in uncharted territory.

Wood Mackenzie also describes what is happening in global oil markets as “uncharted.”

“This is not the first time we’ve seen a price war,” said Tom Ellacott, senior vice-president of corporate upstream for Wood Mackenzie. “But this time, oil demand is also weak as the coronavirus outbreak depresses global economic growth. The macro-economic backdrop is completely uncharted waters for oil and gas companies.”

The oil price plunge will be good for consumers. Gasoline prices in Vancouver had already dropped by $0.10 per litre between March 4 and March 8, according to Dan McTeague, president of Canadians for Affordable Energy.

That was before the plunge in oil futures. McTeague said prices should drop another $0.10 per litre in Vancouver, as a result.

Otherwise, Canadians are about to be reminded of just how important the oil and gas sector still is to the Canadian economy, McTeague said.

“We’ve heard for years that oil will be gone, we’re going to wish it away, it’s a past economy,” McTeague said. “And clearly, as evidenced by today, everybody’s panicked, and it has a lot to do with oil.”

The company building the Coastal GasLink pipeline, TC Energy Corp., experienced an 11 per cent share price drop, and Royal Dutch Shell, the lead partner in the related $40 billion LNG Canada joint venture, had a 17 per cent drop in share prices.

The last time oil prices dropped this sharply, Shell and its joint venture partners pressed the pause button on the $40 billion LNG Canada project. Asked if the latest price plunge could result in another reset, LNG Canada spokesperson Susannah Pierce said it wouldn’t.

Construction is already well underway, and Pierce said the company is moving ahead with the first phase of the project – a two-train LNG plant in Kitimat. But oil and gas companies will likely be reining in spending and putting large capital projects on hold elsewhere in Western Canada.

Canada’s economy was already starting to feel the impacts of railway blockades over the Coastal GasLink pipeline – the full economic impact of which are still not known – and from interruptions in the movement of goods and people over the COVID-19 virus, when OPEC and Russia landed what may have been the knockout punch that triggers a recession.

“This is not just about Alberta,” Kenney said. “Energy is the single largest sub-sector of the entire Canadian national economy. It is by far Canada’s largest export industry. Hundreds of thousands of Canadians depend on the energy sector directly for their livelihoods.”

“The coronvirus has caused the global economy to slow down, and with it the global demand for energy to decline for the first time in over a decade.”

Wood Mackenzie estimates that every US$10 drop in oil prices translates into a US$40 billion reduction on cash flow for oil companies. As a result, S&P Global Platts now predicts oil majors will be forced to slash spending on major projects.

“The impact is global and Canadian producers might suffer even more if the oil that Saudi Arabia sends to the U.S. is medium and heavy,” said global oil consultant Anas Alhajji. “This might last longer than what people think.”

Canada’s oil and natural gas sectors contributed more than $100 billion to Canada’s gross domestic product (GDP) in 2018, according to the Canadian Association of Petroleum Producers (CAPP). It sustained 530,000 jobs across Canada in 2017 and provided $8 billion in tax revenue.

Recent rail blockades over the Coastal GasLink project meant that deliveries of oil by rail were held up. And now that Canada’s trains are moving again, that oil will be delivered at much lower prices now, said CAPP CEO Tim McMillan.

“If we have built up inventories in our storage of oil that we should have been selling last week at global prices, and today, now that the rail lines are moving again, we’re selling at substantially lower, that is a self-inflicted wound that Canada has to bear," McMillan said.

Canada may suffer disproportionately, compared to other oil producing nations, from the oil price crash, and McMillan said it will be largely self-inflicted pain.

Pipeline projects that were either killed (Northern Gateway) or delayed (Trans Mountain expansion) have left Canadian oil producers vulnerable to a single market and a steep discount.

“We are uniquely vulnerable,” McMillan said. “When you have global prices that change radically, you can’t control that. But when you have Canadian prices that are at a steep discount to global prices, that is most certainly something we, as a nation, can and should be addressing, and we haven’t. In fact, we’ve been exacerbating the problem.